Back to all news

SLAM Hosts ‘Speak Out’ Event in Support of HUDS Workers

Undergraduate activist organization Student Labor Action Movement held a “Speak Out” event in support of the workers ahead of negotiations between Harvard and its dining services workers.

Harvard students and employees from across the University voiced their concerns over the details of the health care package that Harvard initially introduced to its non-union employees—a contract that some members believe will be offered to Harvard University Dining Services once they begin negotiations. This highly controversial contract included deductibles and coinsurance payments that some professors argued would unfairly burdenjunior faculty members and those with families. Later, after vetting criticism of the benefits package, Harvard added another plan without deductibles.

A recent contract between Harvard and its largest employee union offered a healthcare plan different than the original non-union employee plan, featuring premium contribution tiers for individuals earning less than $55,000.

Speakers at the event called overwhelmingly for a “coalition” of students and staff at Harvard to rally behind HUDS and other campus workers in pursuit of a different health care plan. Ten campus organizations, including the Harvard College Democrats, Divest Harvard, and Occupy Harvard Law School attended the event in support of Harvard workers. 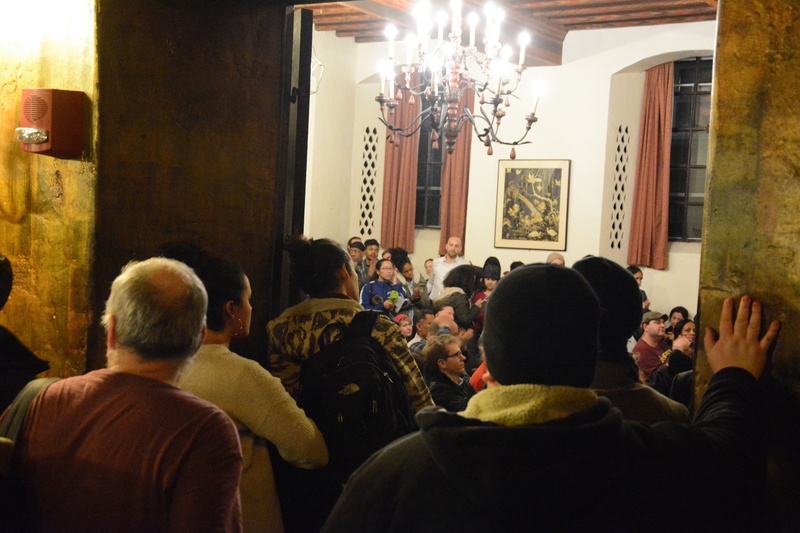 Students and workers line the edges of Adams’ Junior Common Room to protest in support of HUDS workers health care benefits. There was a high turnout at the event, which featured leaders from several Harvard college and graduate student groups. Photo credit: Jiwon Joung

“You know, obviously, it kind of seems like dining services is underappreciated because we just put food out for you guys, but to know that other students are behind us and are supporting us in this fight is amazing,” Laquiesha N. Rainey, a general cook in Lowell and Winthrop houses, said. “I couldn’t be happier to have a system, and a network behind us to make sure that we get what we deserve.”

Rainey discussed a theme HUDS is emphasizing during its negotiation process, “Sustainable Lives,” which calls on Harvard to understand how changes in health care benefits affect the individual lives of union members.

At least one HUCTW member, Thompson Potter, attended the event to voice support for the dining workers and express concern at the impending ratification vote of the tentative agreement reached between Harvard and HUCTW.

Potter called for “militant union activism” to address the health care packages that the University is extending to its union members.

“This deal enshrines the very costs, the very fights that you are fighting for,” Potter said.

Attendance at the event was large enough that there was barely standing room left, and attendees had to cycle out of the room regularly to allow newcomers to listen to the speeches.

Members of SLAM said they were “really excited” about the amount of support that the event drew from Harvard affiliates. “We had some really incredible speakers,” Sam R. Heller ’18, a member of SLAM said.